Markets on the edge of a cliff

... but here is a free dresser I found on the street here (8th Ave/80th St NW) in Seattle, stripped and restored for use by my daughter. 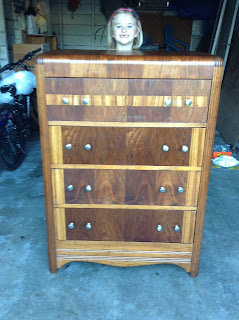 We must recognize what is real and valuable and lasting in our world and save it while we still can.

It could be an old unwanted dresser.  It could be some old analog books and the ideas they contain.

It could be your family, or your nation.

The 20th Century is coming to an end.  What will follow?  What will survive?
Posted by christiangustafson at 7:11 AM 11 comments: Links to this post

How much of a bounce?

We have five waves down the /ES and SPX since the FOMC key reversal high.  The move has stayed relatively well-behaved in a tight channel.  A bounce is due, but how large of one?

Posted by christiangustafson at 8:31 AM 16 comments: Links to this post

The story on Daraprim was a ploy to get the emailgate scandal out of the headlines, so Hillary could shift the subject to health care and free stuff for everyone.

Fec.gov is your friend.  This is so obvious, child's-play.

Question for next week is whether we're done with the retrace or in a terminal diagonal that is almost but not quite complete.

Posted by christiangustafson at 7:41 PM 4 comments: Links to this post

Bounces are back-tests of old rally channels, and the equity markets essentially front-run the December FOMC in a massive collapse.

Posted by christiangustafson at 7:01 AM 22 comments: Links to this post

Going into a crucial week, there is an important line overhead we need to test:


I'll be out in the bush this weekend hiking 50 miles in the Olympic mountains.  I love this time of year when the tourists clear out and everyone else cuddles up with the television and NFL idiocy.  I'll be out looking for signs of the elk rut in the high country, hungry bears, loose cougars, and the rest, while you stew your brains in running-back statistics, wide-receiver match-ups, and injury reports.  À chacun son goût.

After next week, the next support could be as low as 1380 SPX by early October, no, really.  It depends where you begin to count the "wave failure" and technical top.

We could even test 666 this year -- and why not, if risk truly comes off?  How do you set "reasonable" limits to this after we have witnessed August 24?  But we'll worry about this in late November.
Posted by christiangustafson at 6:58 AM 7 comments: Links to this post

Waiting to see if this smaller triangle pattern has a final "e" wave down to support.

Posted by christiangustafson at 6:55 AM 11 comments: Links to this post

The problem with the VIX

Zero Hedge has been making quite a fuss about the volatility ETFs, which I have been using as an indicator these last few weeks that this decline is not yet over.

VIX futures in particular have drawn a pattern that is especially dangerous for the broader markets, and which I think should be respected, a right-angled ascending triangle with a possible target up around 38.  This is a very big deal!


If we reach this chart target on VIX futures, than it is safe to say that the 1867 SPX low will not hold, and neither will expected support at 1820.  Rather, I think we could go as low as 1740 SPX this week on this kind of surge, triggered with crash-like moves on tomorrow's early morning data releases.

A low of 1740 would be an extremely ominous event here.  First, it would mean that it is highly unlikely that we regain the 1900 level on the SPX; recent dip buyers would be stranded with losses, which would become more severe as the new Bear continues.

Second, 1740 SPX would become a neckline for a vicious head-and-shoulders pattern, one that would drop us to the 1346 SPX level as early as the first week of October.

The VIX chart is screaming danger for the short-term.  Do be careful.
Posted by christiangustafson at 8:17 PM 20 comments: Links to this post


Posted by christiangustafson at 6:04 AM 4 comments: Links to this post