From my family, and our friends the Assads, to yours, we wish you health and prosperity for the coming year.

In an astounding twist of fate, Russia is now the guardian of the spark of Western Civilization, while the rest of the Old West rots from within.  The challenge to us all is to survive the collapse of the U.S. Empire in the days ahead.

Well, as long as the dollar still counts as the World Reserve Currency, we can still go shopping.


How long before these scenes are at Safeway and COSTCO?  Two years?  Three?

Austrians know how this story ends.  When the Dollar Era concludes, the mal-investments and unsustainable liabilities will be liquidated.

Do your best not to be one of them.

Draghi speaks tonight.  What will he say?

Posted by christiangustafson at 1:33 PM 15 comments:

This? Something else? Nothing at all?

We want to see patterns.

We want to believe there is order and causality and sense, matter in motion, not formless chaos.

Green channel?  Sure, why not.

Posted by christiangustafson at 7:03 AM 6 comments:

If you still think we can put in a higher high on SPX, then maybe a giant ending-diagonal count is for you.

I tilt my head and squint my eyes, and the sharp October rally still looks like two five-wave impulse moves north, joined with a little correction -- i.e. an ABC move.  This would fit an ending-diagonal count that has been lurking since the August 24 mini-crash lows, which began with an initial bounce in 3 waves.

In this scenario, the October FOMC Minutes released next Wednesday are dovish and accommodating once again, sparking another short-squeeze off the .382 retrace at 2022 SPX.

The sharp 5th wave could then terminate either at the wedge boundary on Black Friday, or in the middle of the wedge on the December FOMC announcement itself.  AMZN P/E of 1000?

Here in Deflation Land, we make it a point to take our half-dozen or so readers seriously.


So when very-bearish reader Scott asks:

I was asking how you formulated your rising "channel" as it seemed constructed to validate your price target rather than based on price history.


We owe him an explanation.

Here's our rising channel on SPX.  2135 is both a new high and a point at mid-channel on a very special day ahead of us.  It also corresponds to an earlier wave up in the cycle, from 1158 to 1422 on the SPX.


IMO, we have plenty of room to move sideways for a bit before putting in a final high, preferably at mid-channel and accompanied by lows in VIX and volatility ETFs like UVXY that visit their lower daily Bollinger Bands.

Those are nice to have, but the 11/18 release of the October FOMC Minutes is the next important event on the boards.  As much as we can speculate as to how the Fed will or will not act based on economic statistics, here they have a chance to tell us themselves.  And the Fed will hike.

What I am proposing, however, is that as much as the Fed thinks it has the Fall volatility season behind it, the quants and algos may prove them wrong, and we will get something much more serious -- more truly vicious -- than they or anyone but us deflationary doomer Austrian cranks ever imagined.

And we are Austrians.  We believe in reality and in the "long run" of the adults in the room.


And we are not afraid of the future, of revisiting the lower support of the old Jaws of Death.

For the thesis of the deflationist is that we get a deflationary debt crisis first, which shatters the remaining faith in the powers-that-be, in The System and in The Man, which is necessary before the final hyper-inflationary currency collapse.


In that case, I recommend having a few good books on hand, and maybe some candles.


Have a good weekend!
Posted by christiangustafson at 2:29 PM 32 comments:

We need to see 2135 SPX by Friday's NFP release

... and that will set a lot of matter into motion.


2135 SPX is a marginal new high and the top of the current channel.  News-wise, it would be a pop into the NFP numbers released before Friday market open, followed by a sharp sell-off.


A decline into December FOMC allows the rate hike to be "priced in" and for a nice bounce back to resistance into the end of 2015 and Q4.

This sets up January 2016 to be a great crisis and disaster, as a head & shoulders off the 1737 neckline plays out.

Posted by christiangustafson at 7:18 AM 21 comments:

You heard it here first.

Posted by christiangustafson at 8:44 AM 12 comments: 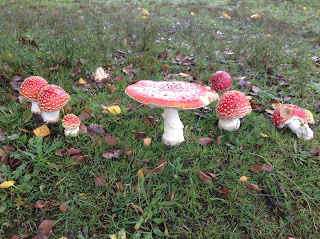 Posted by christiangustafson at 1:59 PM 2 comments: