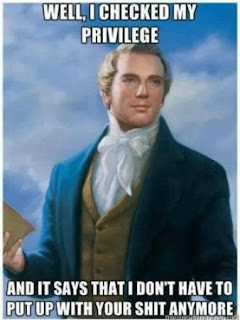 By the terms of this blog project, we're obligated to make an effort to figure out just where in the hell we are.  An ending-diagonal pattern would take a few more tedious weeks to finish.

After that, they're serving volatility -- violence, up and down -- for the rest of the Spring season:

Posted by christiangustafson at 9:14 PM 23 comments: Links to this post

The real question for equity bears is when the Fed will cut, not hike, rates

The Fed has promised hawkish policy and a series of aggressive rate hikes in 2017, presumably to counteract the inflationary fiscal policy from the Trump Administration.  Never mind that the larger project to dismantle globalism is profoundly and probably permanently deflationary. 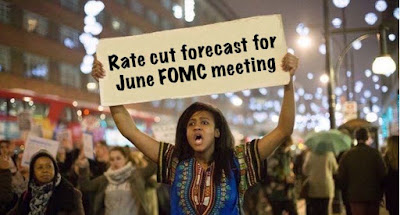 We can expect one rate hike at the very least, as well as the very most.  This would be the third hike since December 2015, and arguably the one to tip the precarious balance in the equity markets.  Let's suppose the Fed members take a pass at the next meeting, in a few weeks, agreeing to wait to see what policy initiatives Trump and the GOP Congress can muster.

Let's suppose we see our next hike at the larger FOMC meeting in March.  There's your spark.  Never mind what was said in December -- that's it, we're one and done for 2017.


Equity bears that are still among the living today should be asking when the Fed will next cut rates, i.e. when the members will see the face of raging deflation, the oncoming recession, panic, and reverse course.  I propose that we see this as soon as the June FOMC meeting, a desperate effort to restore confidence, animal spirits, inflationary expectations, credit expansion, earnings multiples, home equity loans, social media start-ups, 10-year auto loans, good vibrations, the works.

We'll get one hell of a surprise, and an epic bounce in equities, that's for sure.  Almost to a .618 retrace.

After that, we can look forward to the 10Y Treasury yield making its final lows at 1% or even below.  Rates have not broken out of the Volcker bond-bull channel just yet.


Short-term, we're looking to tag the 2300 level next week, before a pull-back into mid-February.


But it will be the rate cut, not the rate hike, that marks the end of the epic reflation rally and a prelude to a fall market crash that will humble 2008.  That's when the Fed shows how desperate and powerless it is at the end of the long-credit cycle.

Posted by christiangustafson at 10:42 PM 50 comments: Links to this post

I've seen this count from some other E-W charters, and now am seeing the reason in it.

The peaking RSI on the daily is our hint that it is the 3rd wave in the series for this long, agonizing ending-diagonal since the 1810 SPX low.

This chart looks to the 3/15 FOMC as the spark to end this mess.  There are a few good intermediate trades before then.  I'm looking for a short off a 2300 SPX high in the next few days, but very conservative options, no crash puts.

As always, patience will get this thing in the end.

Posted by christiangustafson at 4:10 PM 2 comments: Links to this post