No, Peter Schiff, this is not hyperinflation

The usual suspects have come out of the woodwork, Peter Schiff and Jim Rickards, warning of hyperinflation and the necessity of buying gold yesterday.

They are both wrong.  A lot of people scrapping for gold at $1600/oz are going to sell this stuff in frustrated desperation for $1000, maybe less, because they prefer to have dollars again.

Today is not hyperinflation, nor is it next week.  The economy has come to a full stop.  This is a deflationary apocalypse. 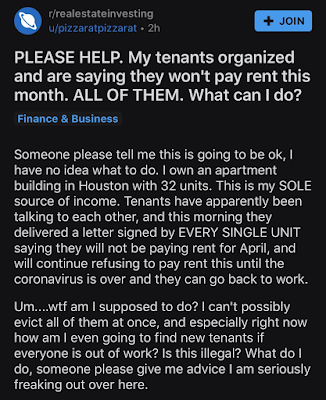 Does anyone seriously believe in a wage-price spiral at this juncture?  The Fed is shoveling cash into a black hole, desperate to stave off cascading debt defaults and complete chaos.  They will shovel a lot more, so that we may survive this crisis.  They simply have no choice.

Daniel Sullivan says it's a "bank holiday", and he may be onto something.  Enough of this was in motion or telegraphed ahead of time, such that the Wuhan coronavirus provided the trigger for the crisis.  There was even a great topping wave count on the S&P 500.

The Fed is desperately trying to keep our economy and society from imploding.  They and Congress will create a huge mass of "money" as quickly as possible, buy anything, prop up whatever, because we still have the world reserve currency, and so we can do this.  It's a feature.  And the rest of the world is counting on us to do it.

Let's review where we are again on the long-term chart, with annotations added to indicate whether we are at risk of hyperinflation. 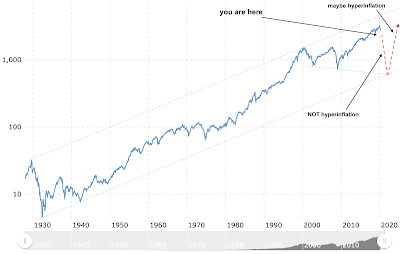 As we are screeching south towards a low of maybe 520 on the S&P 500, this indicates that we are not at risk of hyperinflation.  Money is scared and scarce!  The flows are all broken.  We are in a crisis, it will be vicious, and maybe also brief (over as soon as August?).

They will stuff all the channels, they will feed all the geese, they will buy all the paper at par, and it won't be fair, and you won't like it.  But it may just work, for now, and that is all that matters.

The hyperinflation comes on the heels of one of two reactions to surviving this crisis.  Either we gain a new confidence in our ability to print money at will and to buy all the things, so we keep doing it as formal policy (MMT), thinking we can "manage" it; or we find ourselves tragically stuck here, unable to recover to a new normal.  The built-in $1T Federal deficit will become $2T annually, eventually $3T, and we no longer believe in the worth of this debt or of our money.

Hyperinflation arrives when we have to print money to pay the interest on all of this debt.

The rest of the world will suffer comparably, as we apparently bounce back from this, while they are still hurting, because we create the money.  Hyperinflation arrives when the envy and resentment for this privilege drives them to end the system.

Hyperinflation arrives when the tens of millions of New Americans either feel no obligation to pay for these ancient obligations, or they are just not productive enough to support them.

Hyperinflation arrives when we have even dumber scams than crypto-currency and $900 $TSLA, that we cease to give any credence to any supposed values.

This could happen next year or a decade from now.  The current crisis sets the stage for us to bounce back and evolve into that new normal, where we finally exhaust the US dollar as the world reserve currency.

Current wave count, I think we finished W4 today and are headed down in W5 of A, which should undercut the topping megaphone a bit, reaching 2015 or so at the end of March.

April is the relief rally.  We will get positive news on the Wuhan coronavirus front, have a lot of free, fresh new money circulating in the system, and we might even get back into the office.
Posted by christiangustafson at 7:40 PM 35 comments:

When you can no longer hedge risk

Do you understand the gravity of what happened on Friday?

Do you see what I see?

With the quad-witch opex Friday, a great mass of financial insurance just came off the table.  The market bounced off resistance mid-session, and sold hard into the close.

The $SPY made new crash lows in after-hours trading. 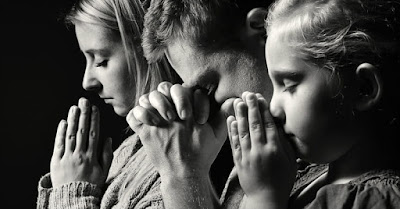 Here is the problem.  With a sustained sky-high $VIX, hedge funds and other players are no longer able to hedge long positions in the markets.  Say you are a fund with 1 million shares of $SPY, optimistic for the long-term growth and progress of the America, but worried about the risks posed by an uncertain event, like Brexit or a "trade deal" negotiation.

With volatility at normal levels, with $VIX below 20, you can always buy put options to insure the value of your holdings against an unexpected drop in prices.  If you're clever enough, you might even cash out your puts green, rolling them into buying the dip on the indexes to make even greater returns, because the market, after all, she only goes up.

The $VIX is now pegged above 60, spreads are blown out, and put options as portfolio insurance are no longer possible -- with any duration, they are outrageously expensive.  The existing risk models and approaches no longer work.

March options have now expired.  You cannot insure your positions.  But you can sell them.

The S&P 500 closed at 2304.92 Friday.  If the /ES futures are limit down Sunday night, then we have the following circuit-breaker bands for Monday:


A rare level 3 circuit-breaker crash is very much on the table for Monday.

The nearest clear technical support would be 1810 on the S&P, reached at the open on Tuesday.  This is a no-brainer for all players, which will rally us back to channel resistance -- now under the topping megaphone -- into the end of the month.  I believe that algorithmic trading systems will buy an 1810 low.

A final drop into early April returns us back to the area of the 2007 (year) highs, recognized as critical and truly ominous by everyone.


A sharp relief rally on the lunar cycle can then take us back to overhead resistance from the original move and base channel off the top.  We may see a slowing of the Chinese virus throughout the world, a leveling off of new cases and casualties, maybe even the welcome news of effective treatments for it.  These are good things, yes, but this pause and rally is just the eye of the storm.

We then meet the C-wave of the decline, as the economic impact of the virus arrives, like the second half of a hurricane beyond the eye-wall.  Now we get the mass-layoffs, destroyed earnings, collateral damage (on actual collateral) in real estate, commercial and residential, as well as all of the consequences from that.

The long-long term channel support for the markets is at about 520 on the S&P 500, which we could see as early as the June FOMC meeting.  This level also is the trendline between the 2002 and 2009 market lows.  The Fed will go full Bernanke helicopter-money on this one, maybe they can print up $50K or even $100K per American household.  The Federal quarantine shutdown bonus coming soon is a trial run of this mechanism.


We should know on Sunday night.  Good luck to friendlies.

If we get a dump tomorrow that is comparable to the dive to 2854 in wave 1, then maybe we visit 1940 on the S&P 500 tomorrow.  Congress is bickering about fiscal stimulus package details, so the equity markets may help them resolve their differences.  This would trigger 2 halts tomorrow.

Posted by christiangustafson at 11:47 AM 25 comments:

So what's your model?

Impressive finish late today, with the market facing full-spectrum intervention, everyone hoping it doesn't really implode (no, it has not yet). 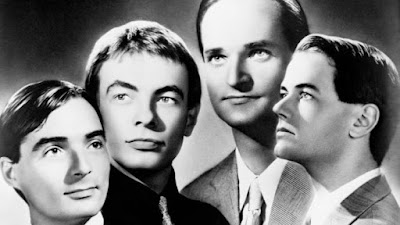 And this is a Good Thing.  Respect that late surge, oh you bears, relax for a week and let the $VIX come back in.  It is very hard to accomplish much good with the $VIX pegged over 70.

Take a breather.  W5 down should make 20-baggers great again if it plays out.

My model holds that we are now crossing the great topping megaphone that began with the 2872 SPX high in January, 2018.  We are due to reach the bottom at 2100 at the end of March, after which we will bounce in a significant "B" wave relief rally.

Presumably by April the R0 of Corona-chan will have peaked and we will see the light at the end of the tunnel, thankfully, a retreat of the dreaded Chinese-made-and-leaked bio-weapon virus.

The B-wave relief rally could retrace back up to 4 of A, or it could (more likely IMO) return to back-test the underside of the "bull market" rally channel itself at 2780.  Losing this channel caused the historic rout on Thursday.

In April, up until about the New Moon, it will be a death march uphill to attempt to regain the old rally channel.  It's all-hands on-deck for this one, the Fed, the banks, internet providers, U.S. corporations, everyone wants to return to the good times of endless asset inflation and credit expansion.  All will extend terms, look the other way, lend a hand.  Just let us have what we had before, please.

That's when C arrives, the real consequences of the fragile JIT supply-chain networks and dodgy financialized leveraged clown-world we created.


Does the Fed just run out of dry powder at the June meeting, with nothing left to give?  Losing the topping megaphone will be similar to losing the rally channel this week -- a market with no bid.  The only bounces then come from obvious technically significant levels and insane bursts of short-covering.

It could all be over by Labor Day.  Hoard good books and heirloom seeds.
Posted by christiangustafson at 9:12 PM 33 comments:


GLTA.  Good luck to all you Austrian deflationistas out there.
Posted by christiangustafson at 6:17 PM 13 comments:

Email ThisBlogThis!Share to TwitterShare to FacebookShare to Pinterest
Labels: OMG

We are crossing the meat of the megaphone now, looking for a first significant low around 2100 SPX at the end of the month. 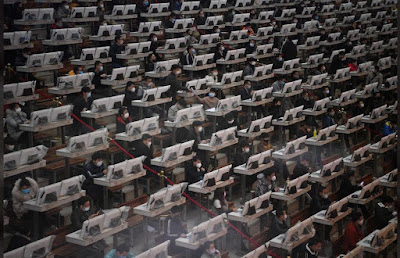 
edit -- let's suggest support @ 2346 low on Tuesday and a W4 that runs through March opex
Posted by christiangustafson at 6:26 AM 5 comments:

Email ThisBlogThis!Share to TwitterShare to FacebookShare to Pinterest
Labels: it's happening

If this local count is on, things are about to get really bad


I think most wave counters probably think the 2854 low on Friday was the fifth of a first wave down. 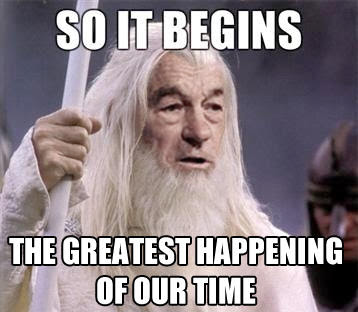 There will be hell to pay if the first wave actually ended at 3007, and the power-dive to 2854 on Friday was an irregular B of 2.


The thrust towards the close today took us to about 3090 -- the underside of the topline of the giant Jaws of Death megaphone.  If we kissed it back and reject it we are headed down in a free-fall.

Posted by christiangustafson at 8:58 PM 9 comments: